Ecology is an overarching idea of Biology. As we explore the biological concepts we will explore ecology all throughout. Ecology demonstrates the science phenomena of relationships in environments. Relationships can tell us about a specific environment and the interactions between the abiotic (non-living) and biotic (living) factors. In this section we are going to break ecology down by looking at biomes and ecosystems through food chains, food webs, and ecological pyramids. We will also discover population growth patterns.

DCI: LS2.A Interdependent relationships in ecosystems: Students in the K-2 grade band focus on animal characteristics. As students progress there is a science conceptual shift towards animal consumption. This idea begins to introduce basic interactions in an ecosystem where grade band 6-8 advances to cause and effect relationships.The learning of biomes allows us as future teachers to understand specific relationships between animals.

DCI: LS2.C Ecosystem dynamics, functioning, and resilience: Students are first introduced to this DCI in grade band 3-5 where they focus on singular environmental factors of one population at a time. This concept is expanded upon in grades 6-8 as they aim to look at environmental factors as a blended relationship. Currently learning about Ecosystems will allow us to have a deepened comprehension of relations.

An initial engagement activity where students learn about the interconnectedness of an ecosystem.

In each of the six biomes on Earth you will discover plants and animal species that have features that suit them for that living condition.

Explore the world of Biomes in this simulation found at: https://www.biointeractive.org/classroom-resources/biomeviewer

*Once on the website be sure to click the button “Launch Interactive.” This is located at the top of the page.

When interacting with the simulation:

Interactions of an Ecosystem

A competitor relationship has battles. These battles for competition can happen within the species or with other outside species. The strongest and most clever individual wins resulting in the population continuing to grow with the best genes.  An example of this would be when a member of a species tries to locate a mate. Let’s discover a male lions during the mating season. The male lions will compete to see who is the strongest to capture the wanted mate. The strongest more dominant wins to mate and reproduce, likely passing on genes that may make the offspring strong. If the battle for competition takes place outside of the species it could result in a population species decrease or reproduction of the lower species with adaptations that continue to help the species thrive. In the worst case the species could become extinct due to the competition.

Commensalism has one species that gains from the other species. The other species has no gain or harm done from the interaction of relationships from that species. An example would be a Robin (bird) and the tree. The Robin benefits from the tree by building a nest in the tree to lay eggs in. However, the tree does not have harm from the Robin nesting in the tree. Another example of commensalism is a rabbit and a Pine Tree. If the rabbit is looking for protection the rabbit can hide in the Pine Tree for protection. The Pine Tree is not harmed from the rabbit taking protection within the branches of the tree.

At each of the links explore a variety of ecosystems:

As you interact with the link which take you to different ecosystems think about the following:

DCI: LS2.B Cycles of matter and energy transfer in ecosystems: Students in K-2 classrooms learn where basic need resources are found on Earth through the DCI of LS1.C and ESS3.A. As grades progress the DCI’s become more specific and break into more categories. Grade band 3-5 starts to explore the flow of energy by focusing on the consumer-prey relationship. There is little depth to matter cycling other than one animal eats another and all energy begins with the sun. This concept is expanded upon in grade band 6-8 grades as students begin to incorporate the movement of matter in nutrient cycles and energy flow through the inclusion of soil and decomposers. In a classroom the teacher needs to have an elaborate understanding of ecosystem interactions.

Ecosystems and Biomes- break students into expert groups. Have each group focus on a biome to then share out with the class. In their groups have students engage with food webs, food chains, and ecological pyramids that relate to their biome.

A food chain is the least complex of the diagrams. A food chain typically has an order starting with a producer then proceeding with the levels of a consumer (primary, secondary, and tertiary). A decomposer may be present. In the food chain the arrows go in one direction indicating the flow of energy from one organism to the next. As animals feed on each other the energy is transferred from one organism to the one who eats that organism. For example, when the fox consumes the Robin, the Robin is passing its energy on to the fox. As the energy is flowing from one level of organisms to the next some energy is lost back into the environment. See an example of a food chain in figure 16.

Figure 16: Food Chain in the Midwest

A food web shows multiple relationships within an ecosystem. This diagram can become complicated as there are multiple organisms present. The main source of energy starts with the sun and is absorbed by the producer. The producer passes the energy onto the consumer and the flow continues. Matter is also represented in this cycle. For more information on the matter cycles see “Impact of Energy and Matter on the Ecosystem.” The energy and matter is represented by arrows on the food web. Here is an example of the presence of energy and matter. A fox consumes a rabbit (this is a predator prey relationship). When the fox consumes a rabbit the energy flows from the rabbit to the fox. Energy is still being lost as consumption takes place. When the fox eats the rabbit, matter is also present in the consumption. This matter is broken down into energy. The matter cycles through the fox and is released back to producers (such as plants) from the fox as organic matter as the fox releases feces or decays. Below is an example of a food web in figure 17. 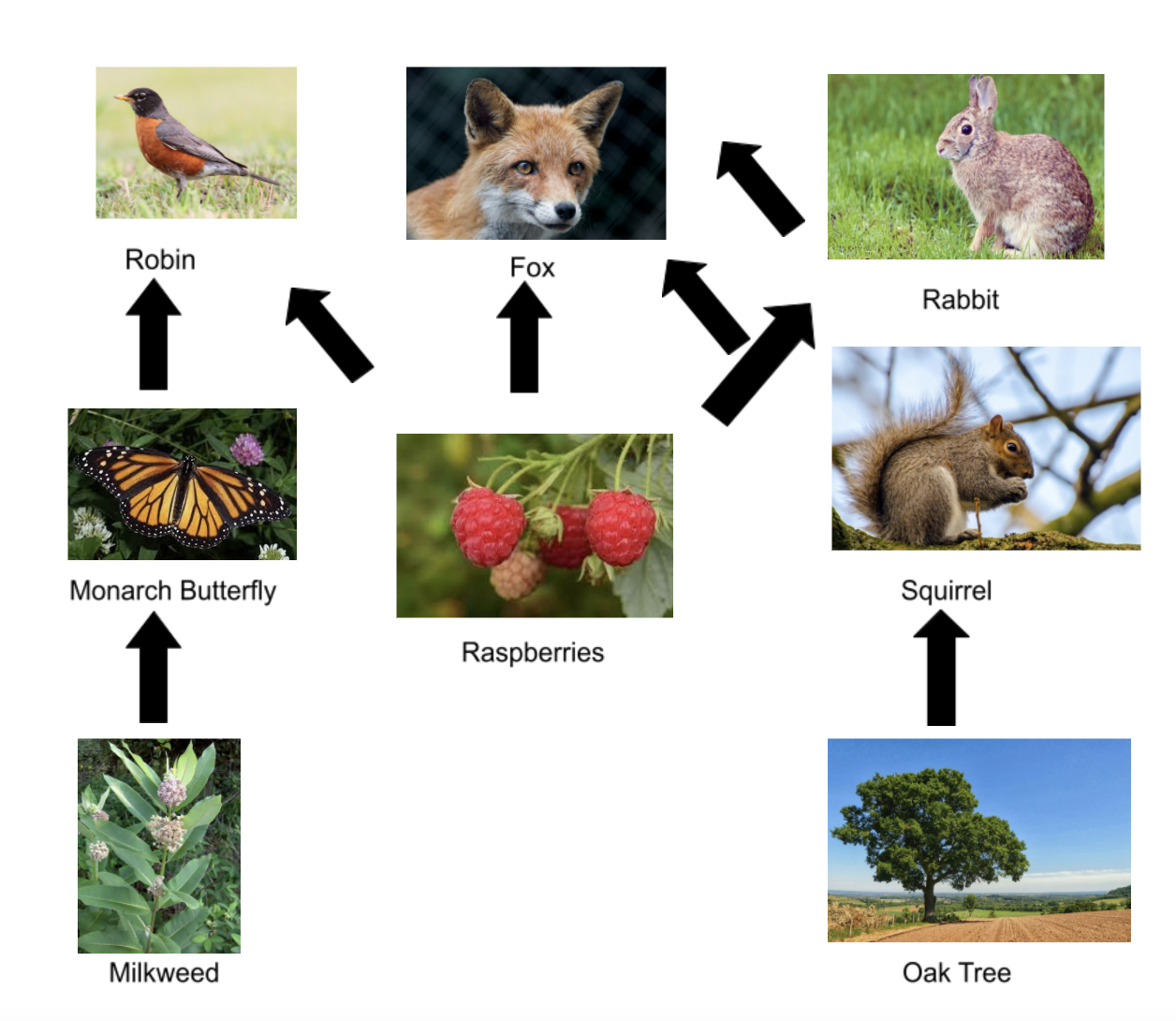 Figure 17: Food Web in the Midwest

An ecological pyramid is a pyramid that shows the varying levels of organisms. This is similar to the food chain. These levels are decomposer, producer, and the levels of a consumer. The ecological pyramid can show the approximate amount of energy that is consumed by each tier of the consumer, as seen in figure 17 as percentages of approximate energy consumed by each of the levels. This approximate amount of energy consumed means as you move up the pyramid from the bottom the organism needs to consume more food in order to continue to survive. This is because the higher up the organism, the organism does not consume as much energy as the tier below. In figure 17 you can see this amount of the energy difference from the producer in the bottom tier to the fox at the very top of the pyramid. The arrow on the ecological pyramid represents the energy that is lost. The cycling of matter is present in the ecological pyramid as well. As the Robin consumes the Monarch Butterfly energy is transferred from the Robin to the Monarch Butterfly. That matter is converted from energy and cycles through from one organism to the next. As the Robin gets rid of waste as feces matter is released back to the producer or the Milkweed as represented in figure 18. 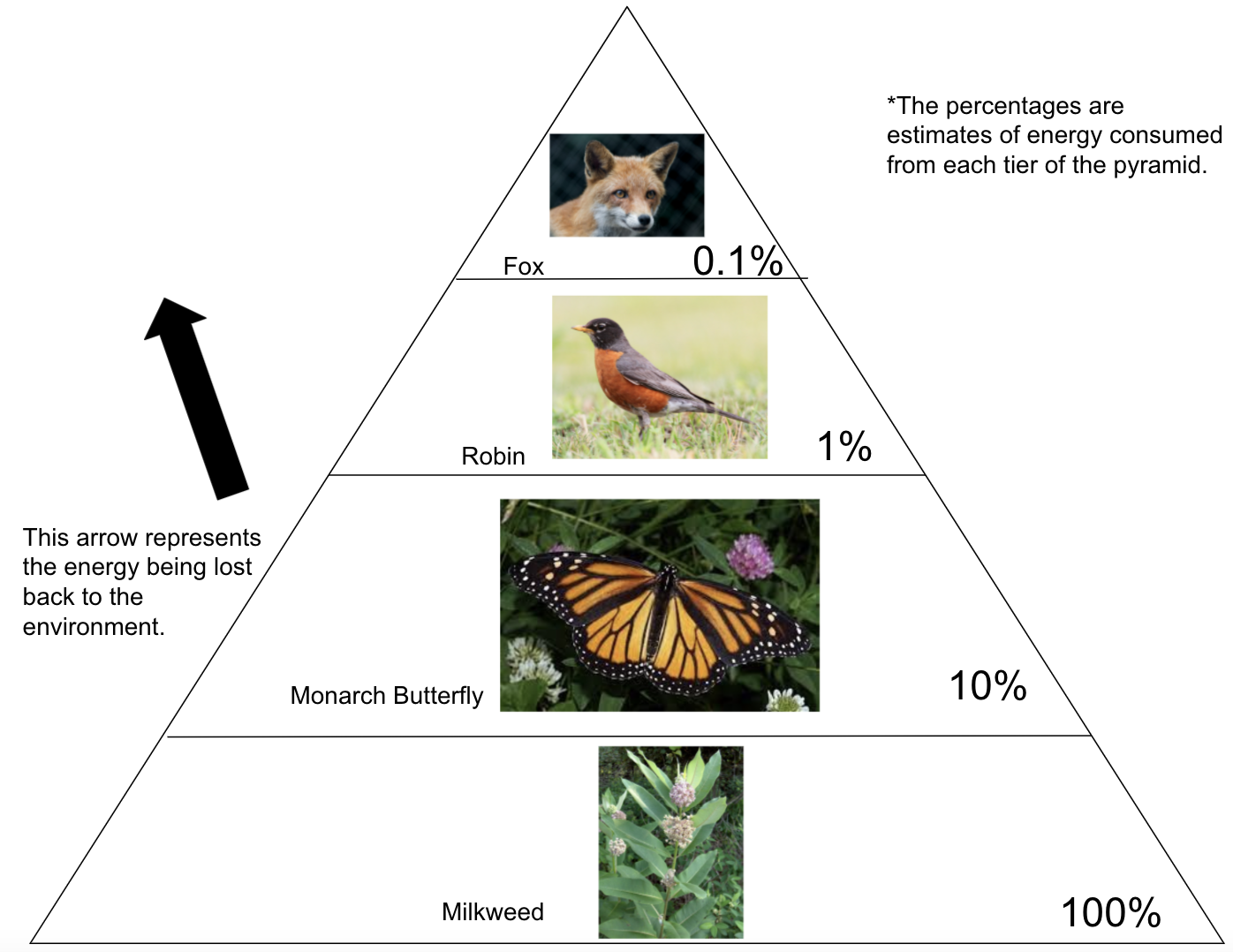 Figure 18: Ecological Pyramid Within the Midwest

Impact of Energy and Matter on the Ecosystem

Explore how  Energy flows throughout the ecosystem.

There are many ways that matter can cycle throughout the environment for example, the carbon cycle, water cycle, and nitrogen cycle. Click below to explore more about each cycle of matter.

In this video you will examine Energy and Matter discussed together in an ecosystem.

In an ecosystem species have relationships with each other. These relationships affect populations of biotic creatures. If one population shifts the other populations that depend on that species will be affected. This could be positive or negative to that species. To examine this further there are patterns to this. These are referred to as patterns of growth. Two growth patterns that we will examine are the J-shaped and the S-shaped growth pattern.

In a J-shaped growth pattern conditions for the species are favorable. This means the species have the resources needed to survive and thrive producing more of the species. These resources can include food, shelter, safety, and reproduction ability. This J-shaped growth pattern can be seen below in a graph in Figure 19. As the conditions continue to be favorable in the environment the species are able to reproduce creating an upward growth in the population overtime. One example could be with foxes. A fox is towards the top of the food chain so does not have to worry a lot about safety. If the fox population has an abundance of food, then food is a favorable condition for the growth of the fox population because there is enough food to go around for each fox. The foxes will then have an increase in reproduction as there is enough resources to increase the foxes population. Keep in mind this is just one example of a species. For some species it can vary depending on their location on the food chain. There may have to be multiple favorable conditions in order for the species to increase in population. 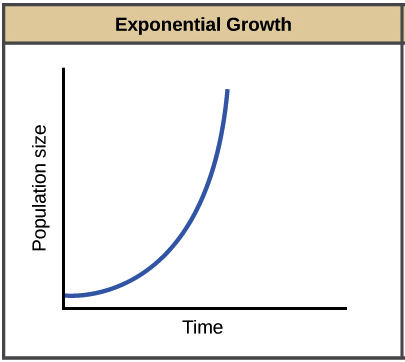 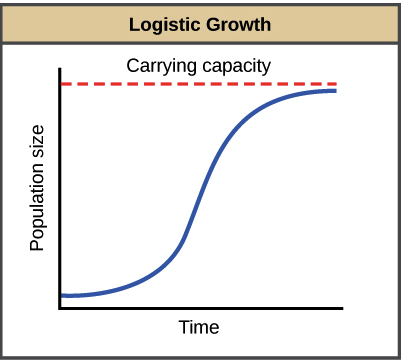 Learn more about Demographic Transition Theory in this video.