All living things evolve. Evolution is a permanent change in genetic makeup of a population over time. A population is the number of all organisms of the same species who live in a particular area and are able to interbreed. Evolution does not happen overnight, but over time and across many generations. It can be caused by natural selection, mutation, or other selective factors. Evolution will be further discussed below.

In the 19th century, Sean Baptist De Lamarck introduced the first theory of evolution, called acquired inheritance. This early theory stated that traits acquired during an organism’s lifetime would be passed down to their offspring. Lamarck’s most common example is the evolution of the giraffe neck. He thought the giraffes had short necked ancestors and would stretch their necks to reach leaves. The giraffes’ were struggling to eat the leaves and because they had been stretching and reaching for them, the longer neck was passed along to the offspring. Of course this is incorrect because we know that traits developed over a lifetime are not automatically passed on to offspring.

Today, acquired inheritance is NOT at all an acceptable scientific theory. But it is important to acknowledge where evolution analysis began. This brings us to Charles Darwin and his theory of evolution. Darwin observed that organisms have variations based on their environment. Darwin visited the Galapagos islands where he observed wildlife as well as collected samples and brought them back to his home in England for further research. Some of his data and analysis was centered around the Galapagos finches. He noticed that from island to island the birds looked the same but the beaks were slightly different. Some of the birds had bigger, sharp beaks while others were small. This was related to a variety in diet for the finches. The birds with the bigger beaks were able to eat harder substances, like nuts, while the smaller beaked birds fed on small, soft seeds or fruit. The variations gave certain Galapagos finches advantages in specific areas.  For example, birds with bigger beaks were able to survive better in locations where the food sources were harder substances. These seemingly minor variations provided advantages to some members of the population over others.  This helped Darwin began to realize the different drivers for biological evolution. Thus, the theory of evolution was born.

To learn more explore more about the history of evolution watch this video.

We define evolution as the change in the allelic frequency in a population over time. This is a change in heritable characteristics that happens over many generations of a population. There are many factors that drive evolution and can cause it to happen. The drivers for these biological changes are:

Natural selection is the process in which certain varieties of inheritable traits are more reproductively successful than other varieties. Organisms with more favorable traits are more likely to survive and produce offspring. Natural selection varies in reproduction, heredity, physical characteristics and number of offspring. A good way to think about it is “survival of the fittest”. Those who are well adapted continue to pass those traits along for generations so that specific populations can continue to thrive. Over time, the process of genetic change can result in new genes, traits, and species all because of changes in the genetic code or DNA. This mechanism can then result in natural selection because only the adaptive and strong species can survive.

DCI: LS4.B Natural Selection: In third through fifth grade students learned that sometimes the differences in characteristics of the same species provide advantages in a variety of areas. Students are introduced to survival, finding meats, and reproduction. Those building blocks then help students throughout middle school examine natural selection and the traits determined by genes which are then passed to offspring.

An investigation lesson where students use a model to observe the change in phenotypes overtime within a species.

Everybody wants to choose the best mate but what makes a mate the “best”? Mating preferences, or sexual selection, is seen in sexual organisms. But the way in which an organism chooses a mate differs. Every organism wants to receive the “good” genes. This sexual selection creates a situation in which certain inheritable morphological or physical traits provide greater potential for mating and therefore, greater chance of passing your genes to the next generation.

Migration is the movement of some members of a population either into or out of an existing population. One purpose of migration is to move to a new location, meet a new population of the same species and breed with them. Species migrate so they are able to take full advantage of more favorable conditions as well. Migration is frequently occurring for many organisms on a seasonal basis as well as a daily basis. These movements happen to take advantage of food availability, safety from predators, mating opportunity, and other environmental factors. Each organism migrates in its own way. Human beings migrate for economic, social, political, and environmental reasons while other organisms migrate mostly for environmental factors. The most common reason for migration in organisms other than humans is due to seasonal changes. Birds migrate south for the winter due to the cold weather (hence the term snowbirds referring to humans heading south for the cold months). Other species, such as whales, undertake the longest migration of any mammal from their feeding grounds in the arctic waters to breed in the Baja lagoons. This movement of the population is a potential driver for biological evolution. Migration enables a gene flow to occur. Gene flow is the movement from one population to another. During this time gene pool frequencies are easily changed, resulting in evolution.

Mutations are changes in genetic sequencing. Evolution and mutation go hand in hand.  Mutations are important to evolution. Even more so, every single genetic feature of every organism was initially the result of a mutation. Mutations occur when there is a change in the DNA sequence that may or may not result in new traits. Mutations create the new DNA sequence for a particular gene thus creating a new allele. These mutations can be caused by mutagens (environmental factors including radiation, chemicals, and infectious agents) or errors within DNA replication, transcription, or translation. Mutation may sound like a scary or bad thing, but mutational effects can be beneficial, harmful, or neutral.

Science utilizes the structure of claims based on evidence, and as more data is found concepts change or alter to represent the new information. The scientific concept of evolution is no exception to this. In this section you will observe a variety of evidence for the theory of evolution. While diving into this section keep in mind that evolution is a change in allelic frequency within a population overtime. In many instances we can observe the change in alleles through the phenotypes that are represented by them. As you make your way through this section consider how the evidence shown may support and to what extent the evidence may support the theory of evolution.

DCI: LS4.A Evidence of Common Ancestry and Diversity: Once students are in third grade, they begin to learn about plants and animals that once lived but are no longer here and how fossils provide evidence. The middle school students further their investigation of fossils and begin to compare the similarities and differences between living organisms today and organisms in the fossil record.

Fossils are important evidence for evolution because they show that life on earth once looked different than it does now. Fossils are physical proof of the existence of now-extinct animals that lived on earth during different times. Fossils of the most simple organisms can be found in the oldest of rocks. Darwin’s theory supports the idea that these simple organisms gradually evolved into more complex organisms.

Fossils support Darwin’s theory because they provide a snapshot in time of the past, allowing us to study how an organism has changed as life developed on earth.

DCI: LS4.C Adaptation: Students discuss that for any particular environment there will be some organisms that survive, some that thrive, and some that do not. This adaptation by natural selection is then explored throughout middle school (6-8) and students take a look at generations and the change over time in response to changes in the environment.

Embryology is the study of the development of embryos. Studying embryos helps us look at the similarities between early stages of an embryo among different species. Ernest Haeckel came up with some exaggerated drawings (figure 35) to show the similarities and differences. Though they are not truly accurate, they were some of the first attempts at using embryology as evidence for evolution. This picture is often questioned but we must acknowledge the similarities. Insects and people born with uteruses both have eggs. Plants have both a sperm (pollen in plants) and an egg like humans. Most vertebrates have a spine. We can see the similarities within these species even though they are different. 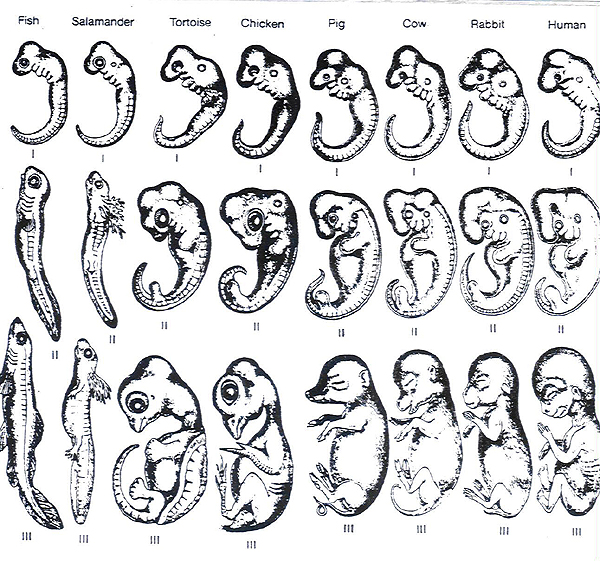 DNA sequencing is the process of determining the order of nucleotides within DNA to compare healthy DNA to the mutated DNA or to observe connections between species. DNA contains an enormous amount of genetic information about the evolution of each organism. DNA sequences form hereditary links between generations. Thus, scientists want to study the relationship between DNA and evolution. By studying DNA sequencing, evolutionary origins can be unlocked and compared. This helps scientists determine evolutionary relationships among organisms and is able to indicate when this divergence from the origin happened in the past.

This work (Elementary Science Methods I by Cathryn Carney, Laura Webb, and Karly Raus) is free of known copyright restrictions.