What is a force?

How can we make an object move? We can push, pull, spin, bounce, throw, kick, and drop it, for example. Is it possible to make something move without these actions? No!  These actions are all forces. A force needs to act on an object that is not moving in order to make it move.

A force is a push or a pull.

Why do things not move?

We may not be aware of it, but every object, every motion, even things that are not moving are all acted on by forces at all times. Consider a book on a table. It may seem to not have any forces, but when you hold it book in the palm of your hand, you feel the force of the weight of the book pushing down on your hand. In order to hold the book up, your hand pushes up on the book. If you put the book back on the table, the book pushes down while the table pushes up. 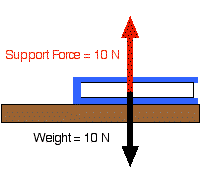 (note: N stands for Newtons, or the unit of force)

The table pushes up on the book with the same amount of force as the book pushing down on the table, which leads us to a more sophisticated definition of force:

A force is a push or pull upon an object resulting from the object’s interaction with another object.

A force does not just magically appear by itself on an object; there needs to be another object acting on it in some way.

Why do things move?

So what will make something move? In order to make our book move, we need to apply another force to it that is strong enough to make it move. Experiment with the simulation, “net force,” or the tug or war, below. What do you notice?

If you have equal forces applied to both ends of the rope, it does not move! The forces are balanced. In order to move, one side must have a bigger pull, or force, than the other. The forces must be unbalanced. When the forces on an object are unbalanced, things move. In other words, objects at rest remain at rest, while objects in motion stay in motion unless acted on by an unbalanced external force. This is Newton’s First Law:

Objects at rest remain at rest, while objects in motion stay in motion unless acted on by an unbalanced external force

Every object persists in its state of rest or uniform motion in a straight line unless it is compelled to change that state by forces impressed on it.

Car crashes vividly illustrate Newton’s first law. Watch the video below. Why do we need to wear our seat belts in cars?

In a car crash, the car stops suddenly but we keep going since we are an object in motion, staying in motion. We need the seat belt to stop us so we do not go flying through the windshield.

Why do things stop moving?

If objects in motion stay in motion, why do they stop eventually? Why will a block eventually stop sliding after you give it a hard push? As the block slides, the floor rubs against it, creating a force that acts against the direction of the block’s movement. This force is called .

Friction is:
A force that holds back the motion of a sliding object
Or
Resistance to motion of one object moving relative to another

Try playing around with the motion part of the simulation. What do you notice?

You probably noticed that heavier objects require a bigger push, or force, to move. Heavier objects have more . Objects with greater inertia require more force to change their motion: to start moving, stop moving, or change direction. For example, think of the Titanic trying to avoid crashing into an iceberg; it had too much inertia to change direction quickly enough and hit the iceberg, thus sinking.

We also see inertia and Newton’s first law in action when we perform a magic trick: pulling a tablecloth off a table that has dishes on it, and not breaking the dishes. Can you figure out why the dishes stay on the table?

Notice that the video offered a few tips to make the trick work. It suggested that you weigh down any light objects, thus increasing their inertia. It also suggests pulling the tablecloth quickly and straight down. Why do you need to pull quickly and down?

What factors affect force and how objects move?

We already see that mass affects how things move. Force has two other factors we need to be aware of: speed and direction. In the tablecloth trick, we had to pull the tablecloth quickly and down. We had to apply a fast force in a certain direction. If we moved the tablecloth slowly, the dishes would just come along with it. However, when we moved it quickly, the tablecloth accelerated, or sped up very quickly, and the dishes just couldn’t keep up. This leads us to Newton’s Second Law.

The greater the mass of an object, the more force it will take to accelerate the object.

Force is equal to the change in momentum (mV) per change in time. For a constant mass, force equals mass times acceleration.

For example, if we apply the same amount of force to a shopping cart loaded with groceries versus a empty cart, the loaded cart will move more slowly than the empty cart. If we want the two carts to move at the same speed, we need to use more force to move the loaded cart.

So far, we have been thinking of forces as single forces acting on an object. However, is that entirely accurate?When a book rests on a table, you have two forces: the force of the book on the table and the force of the table on the book.

Consider a woman throwing a ball. What forces are present?

As the soccer player’s hand pushes against the ball, the ball pushes back against her hand equally as hard. The two forces are equal. Forces come in pairs: an action and a reaction force. This is Newton’s third law.

For every action there is an equal and opposite reaction.

For example, when a diver jumps off a diving board, she pushes down on the board with her feet. The board pushes upwards against her feet just as hard and she is launched into the air.

Rockets are launched into space with Newton’s Third Law. Watch the following video (you can scroll ahead to 1:20 for the actual launch). What is the action and its equal and opposite reaction that launches the rocket into space?

As the rocket fuel burns, it is pushed down out of the rocket as gas, which produces its opposite force that pushes upwards on the rocket, sending it into space.

Can you make an object move without touching it?

Gravity, magnets, and electrostatic forces (static electricity) can all make things move without touching the object itself.

How do airplanes fly? What forces allow a huge heavy plane to fly?

Bernoulli’s Principle states that as the speed of a moving gas or liquid increases, decreases and vice versa; as the speed decreases, pressure increases. 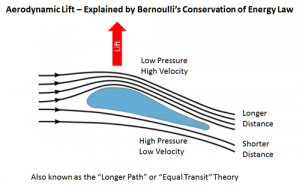 PS3.C: Relationship Between Energy and Forces

Too many to list: anything to do with motion: ramps, cars,

a force that holds back the motion of a sliding object

An object's tendency to resist changes in motion.

force applied over an area

Elementary Earth and Space Science Methods by Ted Neal is licensed under a Creative Commons Attribution-NonCommercial-ShareAlike 4.0 International License, except where otherwise noted.