The goal of Tier 2 is to have students investigate local climate issues, using real-world data. Students will begin with a guided example, with a predetermined question, where they will investigate forcing (what is happening), then, what is the cause, the impact and finally, what can be done/should anything be done? A guided template is below, including resources, to help students with the first iteration. At the conclusion of this guided inquiry investigation, students will branch off into an open investigation. Students will be given a range of investigations, including open to their interest area, to explore and learn about. They will work in groups but be broken into jigsaw groups to make a consensus statement, supported by the data, with an overall climate statement.

What is Soil erosion? What are nutrients plants need?

Background Knowledge: Soil erosion is a natural process that affects all landforms. It involves soil being worn down and moved, usually by way of water, wind, or in recent history, humans. Erosion is a big concern for humans, because we are highly dependent on agriculture for food. The amount of erosion dictates how much topsoil is present, which can then determine what crops can be planted on a given field, and the potential yields. There are a variety of different types of erosion within wind and water, and humans can impact the degree. A big part of the soil is the chemical nutrients that plants use within it. The most crucial nutrients plants depend on are nitrogen, phosphorus, and potassium.

Prompting Questions: What claims can you make using the evidence from these graphs and other sources you can find?

Iowa’s soil is leaving the state and it is causing major financial problems for the farmers and business that rely on agriculture for their living. An Environmental working group estimates that 88,000 farmers will be affected by a 1 billion dollars in lost crop productions. A number of conservation practices are being implemented but still Iowa’s soil and nutrients are ending up in the Gulf of Mexico resulting in problems for the ecosystem.

Gulf hypoxia not as simple as it seems:

This article talks about the effects of nutrient runoff in Iowa has on bodies of water distant from the state. Oceanic dead zones are produced by the high concentration of nitrogen coming from Iowa and other states use of fertilizers and pesticides.

Article about soil loss and conservation in IA:

Picture below shows data of growing degree days, precipitation amounts, and temperature data in the state of Iowa. May 1st through October 10th. 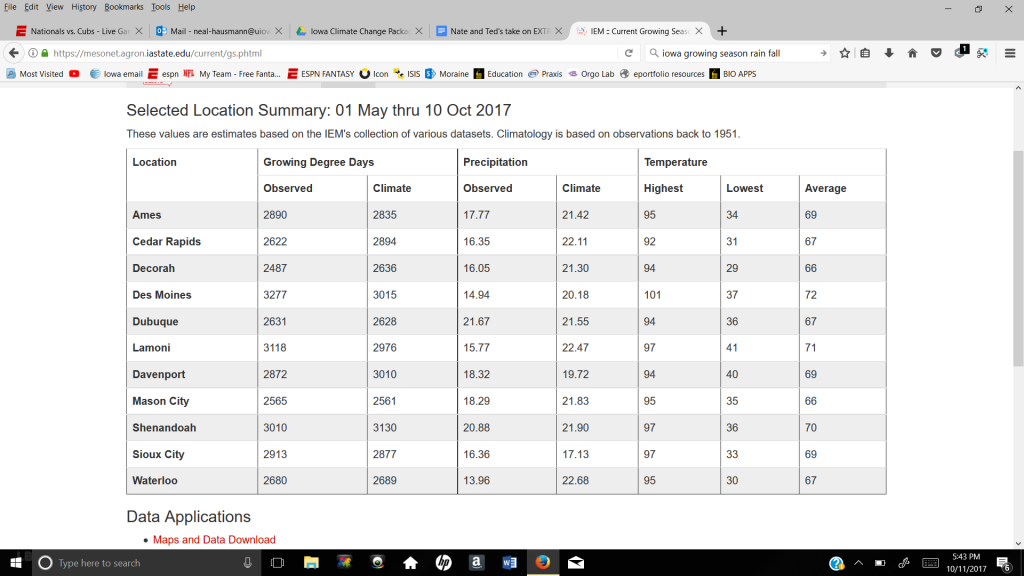 Compilation and review of studies of climate change on soil erosion and biome: 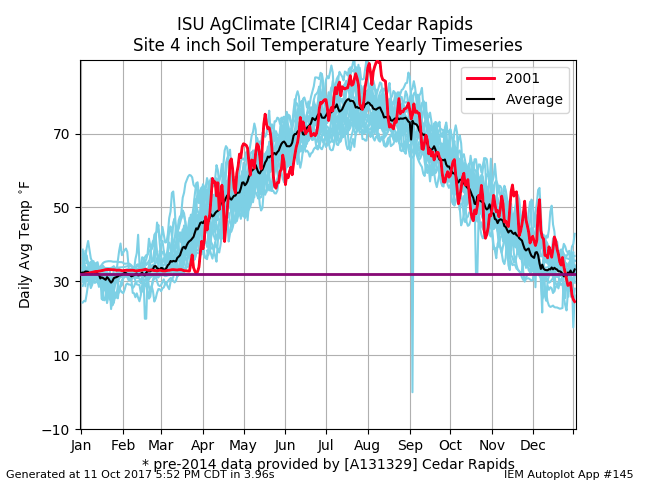 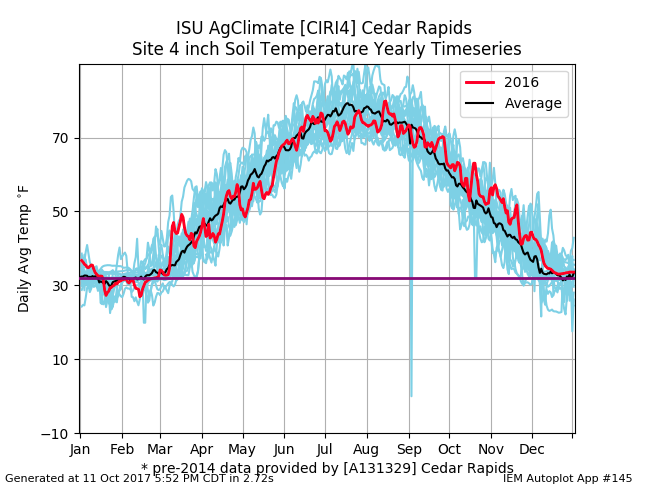 Cedar Rapids, Iowa soil temperature taken from the year 2001 and 2016. Data and Graphs were taken and generated using the Iowa State University Mesonet.

“This module uses real data to address soil sustainability in the context of land management and climate change.”